The donkey in literature: from the most humble creature to a faithful friend

Donkeys appear in various ways in literature; mostly in a negative context as a symbol of human flaws, weaknesses and failures. Rarely are they portrayed as a being worthy of respect and admiration. Here I will give a few examples of the donkey in well-known literary works.
The donkey is one of the most exploited and abused animals in history. Donkeys were used for towing cargo and for chariots in Sumer (modern day Iraq/Kuwait) as early as around 2600 BC. The attitude towards donkeys has not changed much even today. The donkey is still a labor force that is brutally used and a tourist attraction in some countries, even ridden by people who weigh over 100 kilos.

Meet animals in books and movies, not in zoo

I’ve heard some parents say “My 5-year-old child loves animals so much and there is no other way to meet his favorite heroes from ‘The Lion King’ but to take him to the zoo.” The zoo is indeed home to celebrity doubles from children’s favorite movies and books, such as lions, giraffes, tigers, elephants, hyenas, monkeys, pythons, parrots, and other exotic species.

What if parents say, “My five-year-old is so interested in the secrets of the Universe.” What is the best way to learn about planets? Maybe buy him a rocket ticket to Mars?! It’s a little expensive, but you could let your little boy write a Christmas letter to Elon Musk to ask.

Can animals have conversations with each other?

Many people are surprised to hear that animals can communicate just as much as they do. Most believe that only parrots have the gift of speech. However, all animal species have their own language, and the fact that we do not understand them is actually our problem. Many people do not understand French or Chinese either, but they don’t think that the French and the Chinese fail to communicate with each other.

Talking about violence against animals in humorous way

Humor is a powerful tool to talk about important and painful topics in a way that will attract attention. Stand-up comedian and activist Lee Camp manages to speak in a humorous way about animal rights and the manipulation of the meat industry and the media. Like the ingenious Bill Hicks and George Carlin, Lee Camp acts as a critical thinker and a prejudice breaker coming out of a given pattern of human behavior. The comedian presents his own point of view on a world-current topic, which is climate change and the impact of the meat industry on the ecological crisis.

The Myth about Stupid Animals

It is terribly wrong to talk about the equality of animals and humans. Animals are not like humans because they lack many traits that only humans can have: arrogance, hypocrisy, conceit, ambition, and greed. It’s an unrealistic comparison when people who misbehave are told: “You behave like an animal”. What’s wrong with an animal’s behavior? We know that people do things that animals would never think of.

Animals are capable of love

The meat industry, butchers, and hunters find any excuse to kill animals by claiming that animals have no feelings and that they are not capable of love. On the contrary, there are many examples to show that animals are capable of loving their young, their partners, and their friends. They feed their babies, clean them, wash them, play with them, pet them, protect them from danger, teach them life skills, and warn them when they are rude, just as human parents do with their kids.

What do Franz Kafka, Leo Tolstoy, Isaac B. Singer, G.B. Shaw, William Shakespeare, and J.M. Coetzee have in common, besides being genius writers? They were all animal rights advocates who didn’t eat meat. It is especially surprising that Shakespeare wrote about animal...

If you want to choose the right book for your child, don’t let the child choose the book. I’m kidding, of course! It is nice when a child wants to choose a colorful book independently as this often means they are willing to read it. However, the role of parents in choosing books that children will read is also very important. There are many criteria by which parents can choose books, and when it comes to choosing the right vegan children’s books, it is important to pay special attention to two things.

Although there are serious, thoughtful, and heartbreaking poems written in rhyme that is based on good old poetic tradition, rhyme in children’s literature is still associated with humorous and entertaining content. Such rhyming stories and songs lift the mood and bring a smile to the face; not only for children but also for the adults that read with them.

“Who has not seen a child and an animal talking and understanding each other, sharing the same games and the same psychological needs (…) cannot understand that this mutual friendship is the cause of a child’s affinity for animal stories.” – F. Caradec.

Meet me before eat me: COWS

People are always amazed when they find out that animals are intelligent. They are especially amazed when they hear that cows are even smarter than dogs, but sadly, these insights do not prevent them from eating these intelligent beings. They are stunned to hear that cows can talk, cry, and even travel, but that doesn’t seem to make these animals any less of a delicious lunch. Human intelligence is truly surprising! Can you imagine a conversation between two cows? Perhaps they are talking about the weather, food, annoying flies, a torturous life, or even planning an escape. 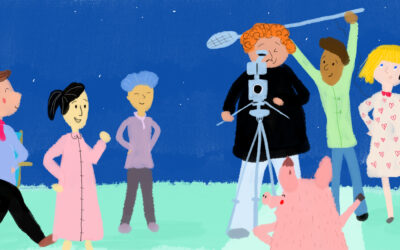 Meet me before eat me: PIGS

People don’t want to know much about pigs because they are aware that it could then be harder to eat someone you know. It could be difficult for them to eat a pig if they knew that pigs could be artists, therapists, detectives, actors, and finally, companions. It is impossible to imagine that pig flesh is found in more than 500 products that people consume and use. About 1.5 million pigs are killed every year, and some have been lucky enough to escape that fate and show the world that pigs are indeed amazing creatures. Let’s meet a pig artist, pig therapist, pig policewoman, and pig actor.