This is a story for parents who want to give their children the opportunity to choose whether they want to eat meat or be vegan.

You know the famous story of The Little Prince a golden-haired boy who lived alone on the planet B612, caring for one sheep and one rose. It never occurred to him to bake his sheep and eat her for lunch.

“Little Prince, why don’t you eat a sheep? The meat is healthy, and the mutton is delicious. Where do your proteins come from?” someone from the Planet of Carnivores asked him.

“I really love my sheep. Adults are very strange. They say they love animals, and yet eat them,” said the Little Prince.

Indeed, adults are very strange. They discuss telling the children the truth about whether there is a Santa Claus, but they don’t want to tell them the true story of how they make sausage, their favorite salami, paté or hamburger.

Some well-meaning people have told me that man is an innate carnivore, and that I should still give my children the opportunity to choose for themselves whether they want to eat meat. Children are intuitive and know for themselves what is best for them. They should be given a chance to see for themselves if they like chicken, for example.

We need to obey the benevolent people God Himself sends to open our eyes. So, I decided to give my children the opportunity to discover a native carnivore inside themselves and to decide for themselves whether to eat meat. I thought it would be fair to offer them as many choices as possible.

The best places for tasting animals are, of course, the animal farms that children are happy to visit. So, instead of going to a restaurant, I took the children to a farm where all the edible domestic animals were gathered. Children could choose what they wanted and how much they wanted, from chicken, turkey, pork, veal, and more.

That morning I intentionally did not give them breakfast, so that the native carnivores would feel hungry beforehand, and would be guided by their unmistakable intuition to choose what or who they wanted to eat.

Although they were very hungry, the children played with the sheep. I watched them closely and did not notice their teeth growing. On the contrary, instead of salivating and fixing them with wide hungry eyes, the children connected with the lambs, showing a certain tenderness and warmth. My younger daughter wanted to bring a sheep home. When I explained to her that sheep were not really suitable pets, she said that was not true, because the Little Prince has a sheep.

The children ran to the den, where little pigs snooped curiously around their feet. I still didn’t notice any signs of starvation in the children, even with the freshest, plumpest pork before them. The kids said the pigs were cool and wanted to take pictures with them. The pork didn’t seem appealing to them.

I thought they might want to try the chicken, so I took them to the chicken coop. Yellow and brown chicks, only a month old, were pecking there next to their mom. The children gleefully ran around them, imitating their sipping and little cheeps. The baby’s salivary glands were on a schedule, and I was a little worried that the little ones had eaten nothing, and it was almost noon.

It looked like pork, mutton, or chicken did not fit the bill, so I took them to a barn that housed a cow with her calf, thinking that the veal may still activate the native carnivore in them. But the children just watched the cow calmly.  It was not so important to them, because it was slow and drowsy.

Today’s kids are really picky. You offer them the whole animal kingdom, practically on a silver platter, and they don’t even blink, let alone catch, bite and eat some of the local food on offer.

After three hours of playing with the farm animals, the born carnivores shouted that they were as hungry as wolves. How was that possible? If they were natural born carnivores, how did they not catch something on their own? How blind were they that they did not see food walking around, food that they just had to grab, pluck, chop and optionally bake… How is it that all carnivores do this naturally? Lions, tigers, foxes, and many others.

I told the kids to feel free to eat whatever they saw around, but they just looked at me in confusion and said, “Mom, don’t be funny. There is no food here, only animals.”

My children are so lazy! They say that they are hungry like wolves and don’t even lift a finger; they expect someone to do everything for them. How beautifully animals raise their children! Young animals catch food and eat it themselves, while these human beings just say they are hungry and expect quick service.

But luckily, my kids aren’t the only lazy ones. I noticed that other children were playing with animals, pampering, hugging and rocking them gently, but surprisingly none of the born carnivores ate any. It seems that their parents did not teach them how to hunt and tear into meat, the way a lioness teaches her cubs, or a cat teaches her kittens.

Now, my conscience is calm. No “well-meaning” bystander can complain to me that I did not give my children the opportunity to choose whether to eat meat. They had a choice that wolves and foxes can only dream of. However, after our visit to the farm, all the sheep were left alive, and my little wolves were still hungry.

Bali: The island without sea

From madness to meaning 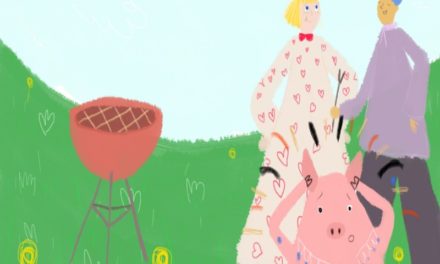 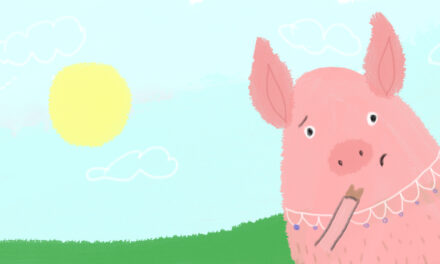 This blog is named after a Muse that inspires modern artists as you can read in short humorious story: Modern art