How does eating animal food affect the nervous system?

Rudolf Steiner (1861-1925), an Austrian scientist, born in Croatia, philosopher, and founder of Waldorf pedagogy, chose a vegetarian diet in 1900 and called it “human progress“. In all his lectures, articles, and books in which nutrition plays a role, Rudolf Steiner repeatedly pointed out the damaging effects of animal food, both in terms of the physical body and the astral body. Steiner noticed the connection between nutrition and the nervous system.

In his lecture “Where and How Does One Find the Spirit?” held in Berlin in 1905, Steiner claimed that food from the animal kingdom has a very specific effect on the nervous system and thus on the astral body. “But with vegetable food, the nervous system remains unaffected by anything external. Anyone who knows how much depends on the nervous system in the human organism will understand what that means.” Steiner also linked eating meat with the appearance of negative emotions: “Where man allows himself to be carried away by anger, antipathy, and prejudice, he owes this to his nourishment from the animal world.” 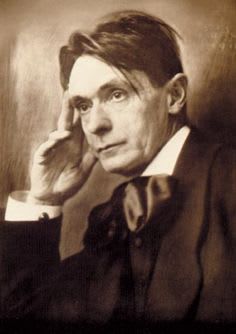 Plant foods contain all the proteins and fats that human needs

Rudolph Steiner even knew at that time that plant foods contain all the proteins and fats that humans need. In his lecture “The Evolution of the Earth and Man” (1924) he said: “Healthy vegetable proteins are what our body has a lot of. When we put chicken protein into our body, our body can be quite a lazy, sluggish body; he will be able to destroy it easily because it is easily destroyed.”

In his lecture “Where and How Does One Find the Spirit?” Rudolph Steiner said that eating meat overall makes the red blood cells heavier and the blood darker than plant food consumption:

But because of this, man is able to control the context of his thoughts from the ego, while heavy blood is an expression of the fact that he is slavishly devoted to what is integrated into his astral body through animal food… Man becomes inwardly stronger through his relationship to the plant world. Through flesh food he incorporates something that gradually becomes real foreign substances that go their own way in him … When the substances go their own way in us, they exert forces that produce hysterical, epileptic states. Because the nervous system receives these impregnations from outside, it succumbs to various nervous diseases. So we see how in a certain respect “man is what he eats”.

What Rudolph Steiner claimed about eating meat more than 100 years ago is today clearly shown by many scientific studies that find a connection between meat consumption and the risk of developing Alzheimer’s disease, various types of cancer, heart attack, stroke, and diabetes.

In his Berlin lecture “Origin Impulses of the Humanities” (1906), Rudolph Steiner claimed that eating meat interferes with thinking processes because meat requires more energy to digest. “If a person eats rice that is quickly digested, then certain forces remain available for his mental activities. Another person who eats wild duck, for example, and takes a correspondingly longer time to digest it, may be quite clever; but when he produces thoughts, his gut actually thinks.” Based on experiential knowledge, Steiner concludes that our human brain has to bear more burden if we eat animal food.

In his lecture on “Health and Illness” in which he discusses vegetarian and meat diets (1922), Rudolph Steiner claims that one of the main advantages of eating only vegetables is that you don’t get tired as quickly. He said:

Since uric acid and urates are not excreted, a person does not get tired so quickly, but he will keep a clearer head and think easier – if he has the habit of thinking! A person who does not know how to think does not gain anything by ridding the brain of urates, because it is necessary for the whole human organization to harmonize. In any case, by self-control man can become a vegetarian today. Then he uses those powers that in meat-eating people simply remain unused.

Although Rudolph Steiner speaks unequivocally about the consequences of eating meat and the influence of animal food on the development of a person’s physical and emotional being, he refrains from giving any commandments and rules to people about what they must eat, because in his opinion it is an individual choice. His role was only to present the facts and give insight; it is up to the individual to decide what one will eat.

In his book: “Harmony of the Creative Word: The Human Being & the Elemental, Animal, Plant, and Mineral Kingdoms” Steiner writes:

Steiner concludes that no animal food should be forbidden to anthroposophists, but a healthy advancing instinctive life gradually resists animal food and no longer likes it, and that is much better than a person becoming a vegetarian on some abstract principle. It is best when anthroposophy causes a kind of disgust and aversion to meat food in the individual.

Rudolf Steiner shared a wealth of advice about the plant and animal kingdom and the proper nutrition of adults and children, which is applied in Waldorf pedagogy in kindergartens and schools around the world. Most Waldorf schools have a garden and encourage vegetable growing and grain milling. The main foods on the pupil’s menu are often salads, fruit, nuts, and stews. Speaking about children’s nutrition, Steiner says:

It is too easy to cause harm by not bringing children into a proper physical relationship with their environment. This can especially happen with their food instincts. Children can be overfed things that make them completely lose their healthy instinct for food, while by giving them adequate food that instinct can be preserved so that they always want what is good for them under the circumstances.

The way in which Waldorf pedagogy conveys messages about values ​​in life to children is by telling stories. Thus, stories about animals as sentient and intelligent beings can stimulate empathy, which affects the relationship with other beings, including animals. In vegan books that are written in a metaphorical way, children find hidden messages that affect their minds and feelings. Some of the stories that encourage empathy towards animals can be found here.

Check my books on Amazon.com:

Rudolph Steiner: Where and How Does One Find the Spirit? Lecture Berlin, December 17, 1908

Rudolph Steiner: The Evolution of the Earth and Man, Lecture Dornach, August 2nd, 1924

Rudolph Steiner: Where and How Does One Find the Spirit? Lecture Berlin, December 1908

Rudolf Steiner: Harmony of the Creative Word: The Human Being & the Elemental, Animal, Plant, and Mineral Kingdoms.

How to talk about veganism with school-aged children?

How to talk to kids about veganism?

This blog is named after a Muse that inspires modern artists as you can read in short humorious story: Modern art